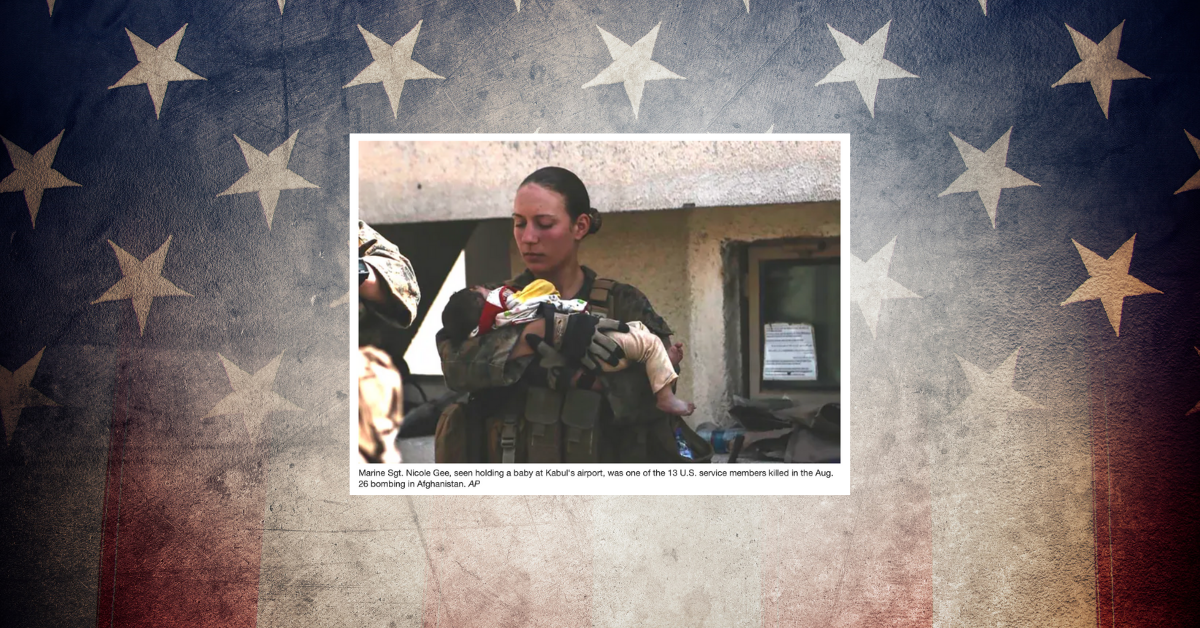 Marine Sergeant Nicole Gee died a hero in Afghanistan on August 26, 2021, along with 12 other U.S. service members, in a suicide bombing near Hamid Karzai International Airport in Kabul, Afghanistan.

Gee, whose husband is also a Marine, was from Sacramento, California and served as a maintenance technician with the 24th Marine Expeditionary Unit from Camp Lejeune in North Carolina.  She graduated from Oakmont High School in Roseville, California and joined the Marines a year later.

I’ve chosen Sergeant Gee as the Pain-2-Power Person of the Week not only because of her service to this country.  Of course, I feel the same gratitude to every man and woman serving in the armed forces and am moved equally by the sacrifice of each of the 13 killed last week.  I have chosen her because it so happens that a photo of Sergeant Gee is so gripping and loving and full of decency that it will, God willing, outlive everyone reading this blog. And that proves that her power persists, even in the midst of death, even in the midst of what can only be unfathomable suffering for her husband and other family members, even as the nation grieves the terrible loss of her and the others who died with her.  It proves that we know precious little about the ways in which God tells His story of undying love for mankind.  We can sometimes only watch, with eyes filled with tears and hearts filled with wonder and hope and faith.

Wonder.  Hope.  Faith.   In the photo I reference, taken August 21, Sergeant Gee is in uniform in Kabul and looking down at an Afghani baby she is holding in her arms.  She posted that photo on her Instagram account and captioned it, “I love my job.”

The innocence of that baby, the courage of Sergeant Gee, the juxtaposition of her loving gaze and her camouflage and munitions and the firearms propped against the wall behind her speak about the incredible power of human empathy and of the infinite and inexplicable ways we are all connected—one to another.  They also speak to the greatness of this nation and the reasons why it will be restored as a beacon of freedom and free will to the world, entire.

I wonder if that baby survived to taste freedom in America.

I hope that that baby one day sees the photo of himself or herself with Sergeant Gee.

And I have faith that Sergeant Gee’s kindness and care and courage, captured as they are in that photograph, make plain that her spirit is, even now, transmuting pain into power.